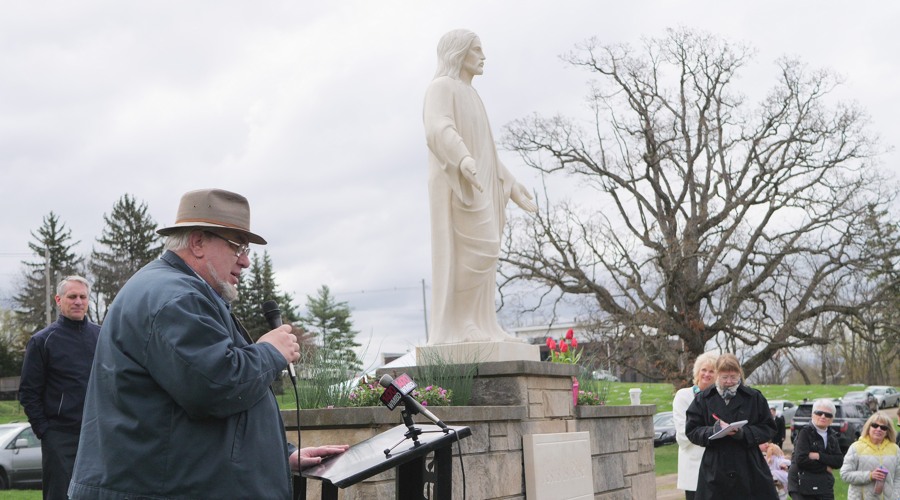 Heritage Restoration and Design was featured in the news for designing and procuring a 3500 pound statue of Jesus risen from the grave for the historic Springdale Cemetery as part of their ongoing monument revitalization efforts.

The new Resurrection statue was dedicated on Good Friday April 19th 2019. The ceremony featured speakers Jack Gove of the Springdale Historic Preservation Foundation, Bill Winkler of Peoria Charter Coach (who purchased the statue), and Michael Berlinger president of Heritage Restoration. Sir Michael described the process for the carving of the fresh statue in Europe, and the significance of the design elements. The previous statue on that spot had lost its upraised arms to vandalism. The new Jesus features arms with palms held out down to the sides, a position less likely to as a target to vandals that have been damaging statues in the cemetery over the past decade.

The Historic Preservation Foundation is seeking to restore many of the three thousand monuments across their property; however the state of the previous statue on resurrection hill was too damaged to repair, with both limbs missing and cracks running several feet across the surface. Instead, donor Bill Winkler and his wife Christy put forth funds for the new statue to be carved by Heritage’s contacts in Europe. The marble piece was then shipped to America where Heritage’s staff added specialize detailing on the hands to make the nail marks.

More details about the statue’s dedication and history can be found here: