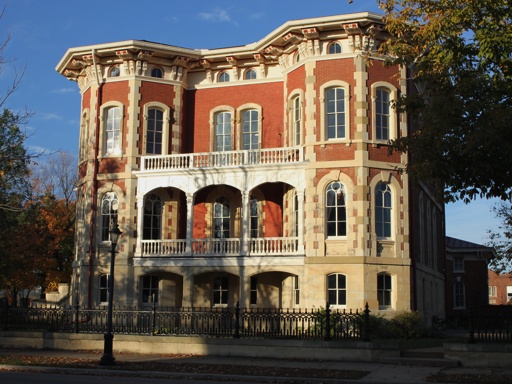 Heritage Restoration was invited to serve as general contractor for the restoration of Reddick Mansion in Ottawa, Illinois. This distinguished pre-Civil War home is a part of the National Register of Historic Places under the Washington Park Historic District. Heritage was also responsible for restoring all of the historic millwork and glass, as well as replicating any missing components that had been lost to time.

In downtown Ottawa Illinois, Reddick Mansion sits as an excellent example of mid-1800s Italianate architecture. This style is most famous for its projected eaves and cornices, low roofs, quoins, and pediment capped windows. The construction of this large home was commissioned by William Reddick, a wealthy politician and influential figure in Ottawa’s LaSalle County. Chicago Architects William B. Olmstead and Peter A. Nicholson designed the mansion. In 1858, the house was completed. The main entrance steps and balconies on the south face were used as a platform for citizens to view the first of Abraham Lincoln’s debates against incumbent Illinois Senator William Douglas.

William Reddick lived in his luxurious home for nearly thirty years. Before his death in 1885, William bequeathed his mansion to the city for use as a public library. The structure underwent severe internal and external modifications at this time including the removal of its rooftop chimney’s and the layout of the interior rooms. The Reddick Library was moved to a new facility in 1975. Since that time, the Reddick Mansion Association has worked to restore the mansion to its original historic state for use as a private museum. Since the early 1970s, the house has been a part of the National Register of Historic Places.

After 162 years, the mansion’s original woodwork was in a state of decay. Toxic lead-based paint was chipping off surfaces ranging from the cornices to doors to window frames. Balconies on both the east and south faces of the house were rotting causing a safety hazard. Ninety-four windows required restoration and cleaning. Additionally, weather exposure had damaged several panes of the imported French glass. A large scale restoration would be required to salvage these historic architectural elements. Heritage Restoration was contacted in 2019 to start work on what would become an 18-month long project.

After arranging for scaffolding to be erected around the mansion, Heritage’s staff began work on the ninety-four antique windows. A key elements of this project was to preserve as much of the original glass and millwork as possible. Delicate and thin fir had been used in the construction of the historic divided lite windows. The fragility of the wood made the process of restoring the frames a lengthy ordeal. First, the windows were documented with a unique identifying number. This number was engraved into the side of the wood sashes. Using these numbers, the sashes’ progress through the restoration process was tracked in a computer database.

The sashes were carefully removed from the window jambs for off-site restoration (with emphasis on the protection of the original glazing). Both the jambs and the sashes were then stripped and abated to remove the original lead-based coatings. Once neutralized, the historic millwork was restored and made operable. Several techniques were involved, such as Dutchman repairs and the use of consolidants to patch splits in the antique wood. At this point, the windows were coated with fresh paint. Then, the glass was reinstalled and glazed into place. Interior coatings were selected to match period-specific rooms. In some cases, this required custom woodgraining to match the faux interior finishes. In previous years, some windows had been removed for storage or converted into fire escape exits. These windows were either recovered and reinstalled or historically replicated to match the original sashes.

Reddick Mansion had several period-specific doors. Most notably of these was the grand entry door that gives access to the second floor living space. During the house’s long service as a library, the doors had been heavily modified. Returning each doorway to their original historic look and shape and required extensive work. One of the north doors had long since been replaced and required a historic replica to be fabricated. Additionally, interior trim and decorative plaster were restored during this time. At the conclusion of their restoration, the doors were back in their original colorization and ready for continued use.

The fourth story cornice was also restored during this project. Initial chemical tests determined that the current failed coating was not the original colors for the mansion. Additionally the cornice was discovered to be made of metal, wood, and terracotta construction. The metal components were determined to be cast iron that had undergone a galvanizing process. In light of this information, a period-accurate color scheme was developed. To both save costs and protect the cornice’s many intricate parts, an encapsulation process was used to lock down the failing lead coatings. Historically accurate accent painting was then applied to the cornice.

The two-story East Balcony was in an advanced state of decay. Wood joists and columns had rotted due to modifications that were made during the mansion’s years as a public library. While period-authentic design was extremely important to this project, the City of Ottawa’s building codes would not allow the balconies to be reconstructed in the original manner. Over the course of three months, the contractor’s design team, structural engineers, and the project architects developed and installed a balcony design that would meet local building codes while maintaining as much of the original look as possible. Historic millwork was restored and reused wherever possible, such as the solid wood arch keystones.

After eighteen months of work, the overall project was completed during October of 2020. The renewed architectural elements breath fresh life into the exterior of Reddick Mansion. In particular highlighting of the cornice embellishments brings them more readily to the eye of those passing below. One of the most elaborate homes built in Illinois before the Civil War can be seen to this day on the corner of Lafayette and Columbus streets in downtown Ottawa. We at Heritage Restoration and the Reddick Mansion Association invite you to visit this splendid site, and see its history with your own eyes.

A Gallery of Reddick Mansion's Restoration 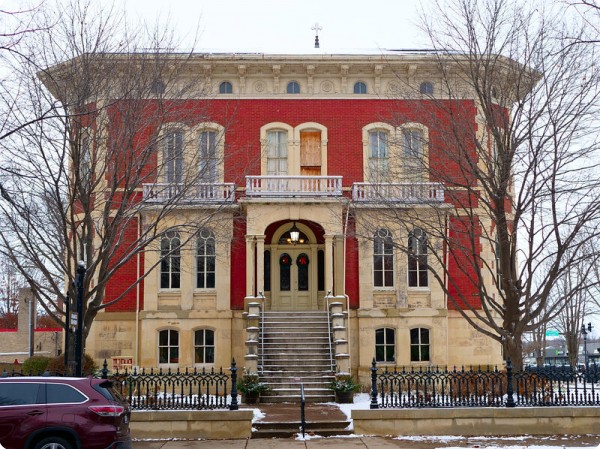 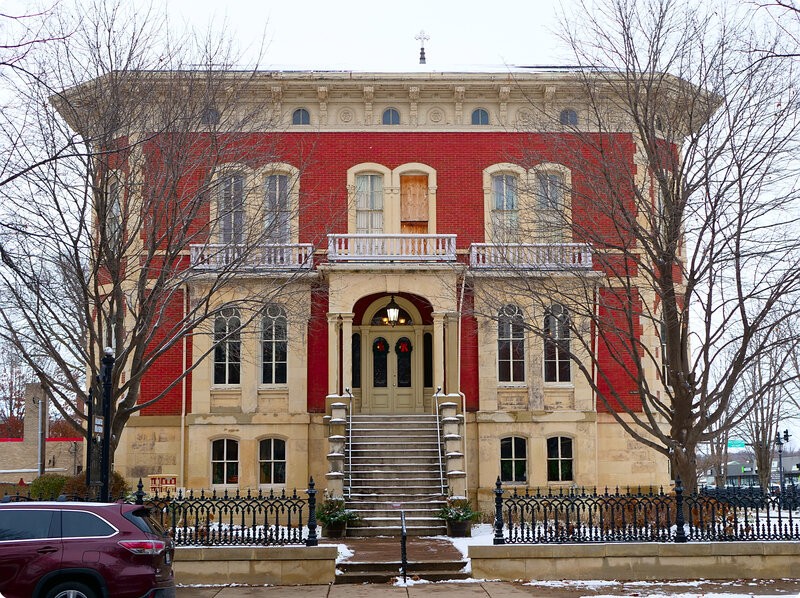