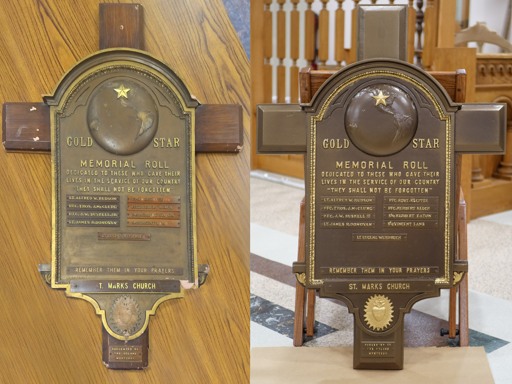 Recently, an antique plaster memorial plaque was discovered in a church’s attic. It commemorates members of the parish who gave their lives in the service of their country during the Second World War. A full restoration was required to salvage the plaque so that it could once again hang proudly inside the church.

Many years in storage had not been kind to the memorial. The backer board was worn, and no longer capable of supporting the plaque’s weight. Several letters had broken off of the deceased’s’ names. Additionally, the plaster was chipped in dozens of areas, particularly on the corners. Heritage’s staff began the restoration by separating the backer board from the plaster plaque. After scraping built-up residue off the plaster, a new form-fitting wooden frame was created. This backer would be four times as thick as the original, with sufficient balance and counterweight to hold the plaque securely.

Using fresh plaster, the chips and damages were filled in across the memorial. Of special note, the missing beaded filigree along the bottom right corner was cut and molded to match the rest of the frame. Lettering missing from the named and descriptions was recreated based off the size and font of the remaining characters. This was accomplished by computer modeling the letters, and then printing them in polymer on a 3D printer. Using the same technique, the worn Sacred Heart of Jesus emblem was recreated for the memorial’s base.

Once the plaque and backer board were attached, the memorial was brought into Heritage’s refinishing room to be painted. A rich, chocolate brown was decided to be the base color. It is most important to vibrantly highlight the detail work in these type of projects. As such, gold leaf was painstakingly applied to each character, border, and emblem. The sharp contrast between the brown and gold colors effortlessly brings the details to the forefront for those viewing the memorial. After the appropriate curing time was completed, the client received their newly restored plaque. Once it is displayed, the parish will once again be paying tribute to those who gave their lives in the war eighty years ago. 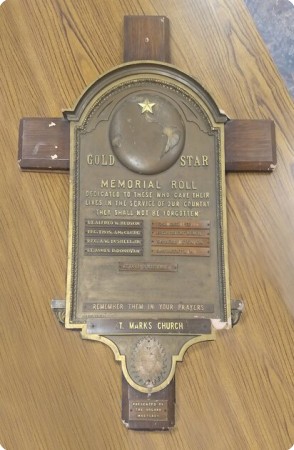 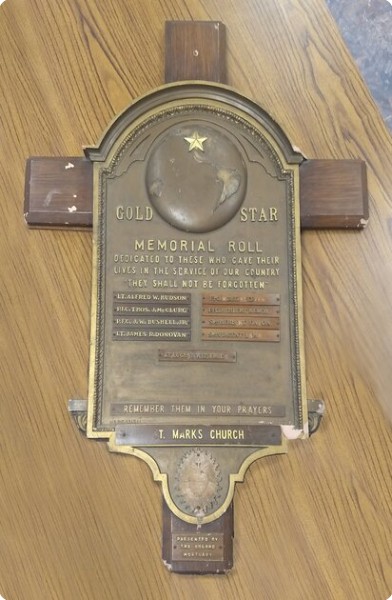