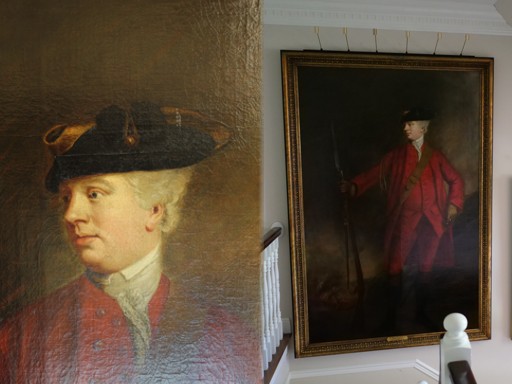 In our latest art project, Heritage Restoration sets about restoring a nine-foot tall oil painting from the eighteenth century. The subject matter is Sir Francis Blake Delaval of Curraghmore. Born in 1727, this Englishman lived a colorful life as a soldier, actor, and member of the British Parliament. Sir Francis was also something of a charlatan, or at least unsuccessful gambler. He died of a stroke in 1771, five years before the American War for Independence would begin.

As is often the case with old oil paintings, the canvas has become dry and brittle. Cracks crisscross the surface of the painting, and compromise the integrity of the image. Small patches of residue have also built up the surface, most noticeably on Sir Francis’ hat. The painting is supported by a large wooden frame. This frame’s front and sides have been dented, scraped, and damaged over years of use.

To repair these damages, Heritage starts by carefully cleaning the back of the canvas. Once the debris and dirt have been removed, a solution is applied to the canvas to make it more supple. Next, the oil painting itself is carefully dry brush cleaned. The former sites of residue are treated to reveal the author’s original colors underneath.

While the painting is being restored, its frame undergoes repairs. The edge moldings are recreated using restoration compounds. This technique creates a uniform surface along the frame edge, which is then painted to match the original colors. The large painting of Sir Francis is reinstalled into the frame as soon as the drying process is complete. Afterwards, Heritage takes the painting to our client’s facility, and reinstalls it in a prominent place where passerbys can admire this fine piece throughout the coming years.