Heritage's Recent Grotto Restoration Is Featured In A Wisconsin Newspaper 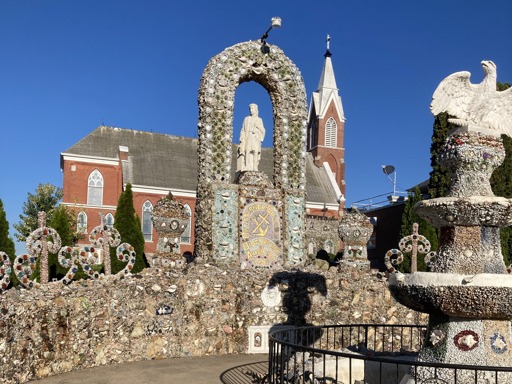 Back in September, Heritage Restoration’s staff began a preservation and restoration project for the historic grotto at Holy Ghost Church in Dickyville, Wisconsin. We later discovered that this work was featured in a local newspaper. Below are some details on this unique project.

In 1925, the parish priest of Holy Ghost Church was Fr. Matthais Wernerus. He was inspired to create a dedicated facility that would promote a sense of both prayer to God and patriotism for the United States. This priest collected bits of material that originated from across the globe and used them to create a devotional grotto. Over a five year period, Fr. Wernerus assembled countless thousands of small chunks of material to build this monument. These pieces included stones, metals, gems, glass, and pottery. These disparate elements were blended together to create a harmony of vivid colors. By the time he died in 1931, the Fr. Wernerus had built several shrines around the grotto garden.

As of the time of this article, these structures have survived for ninety-three years. Regrettably, the elements have started to take their toll. Heritage Restoration traveled to Dickeyville and spent several days examining the various monuments in the grotto. The survey resulted in the discovery of several items of concern. First, numerous chunks of material had broken off the shrine walls and mosaics. Second, several large and small cracks exist in the walls and ceilings of the shrines and main grotto. This poses a problem, as water can travel through these openings into the interior of the shrines and pool. As that happens the stone and mortar become weakened by both efflorescence and the expansion that results from heating and cooling. Third, the grotto’s synthetic rubber roof has not had significant maintenance for decades and is due for replacement. Fourth, mold has built up within the countless cracks and crevasses of the small materials used to construct the grotto garden. Finally, several of the metal supports and rails that hold the monuments together have rusted and weakened.

Heritage’s staff were then tasked with a preliminary cleaning of the monuments. Removing the shere amount of mold and debris was not an easy task. Our staff had to be aggressive enough to clear these substances away, but at the same time being gentle enough to prevent the buildings’ elements from tearing away in the cleaning process. This meant applying a chemical wash several times over at varying intensities.

Once the grotto garden’s structures were washed, they were coated in a water resistance sealant. This clear coating structure contains UV light inhibitors and anti-fungal compounds. The coating encourages water to shed instead of soaking into the materials below. The seal will also serve as a temporary stopgap to prevent further chunks of the monuments to break off prior to a full restoration.

To see some images of this historic project, we invite you to view the gallery below. 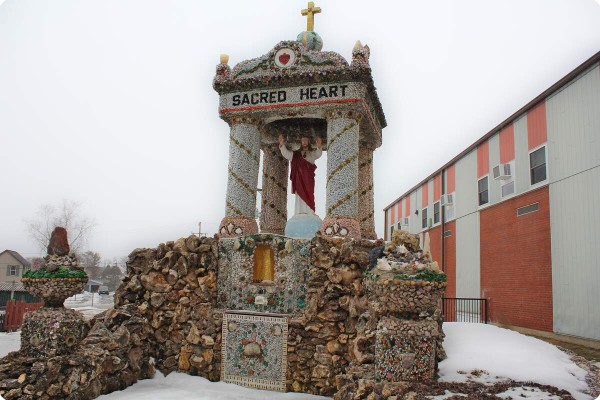 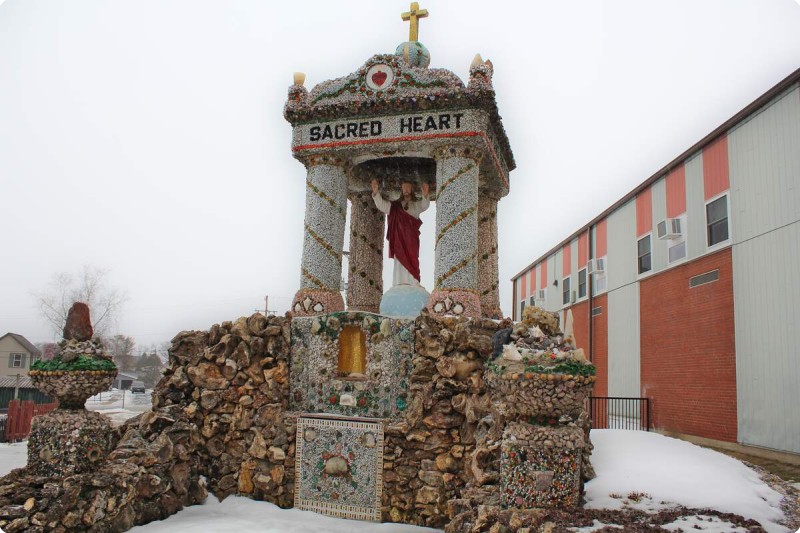